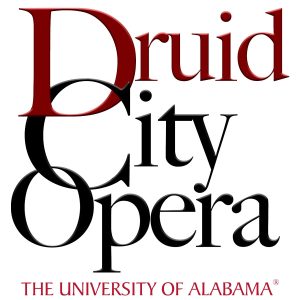 The UA Opera Theatre and the School of Music are pleased to announce the second season of  The Druid City Opera at The University of Alabama.

Exciting News … in 2023, Druid City Opera will begin a partnership with The Tuscaloosa Symphony Orchestra !!!  Natassia Perrine, Executive Director.  This great collaboration will be an important step forward for Druid City and opera lovers in West Central Alabama!  Thank you TSO!! 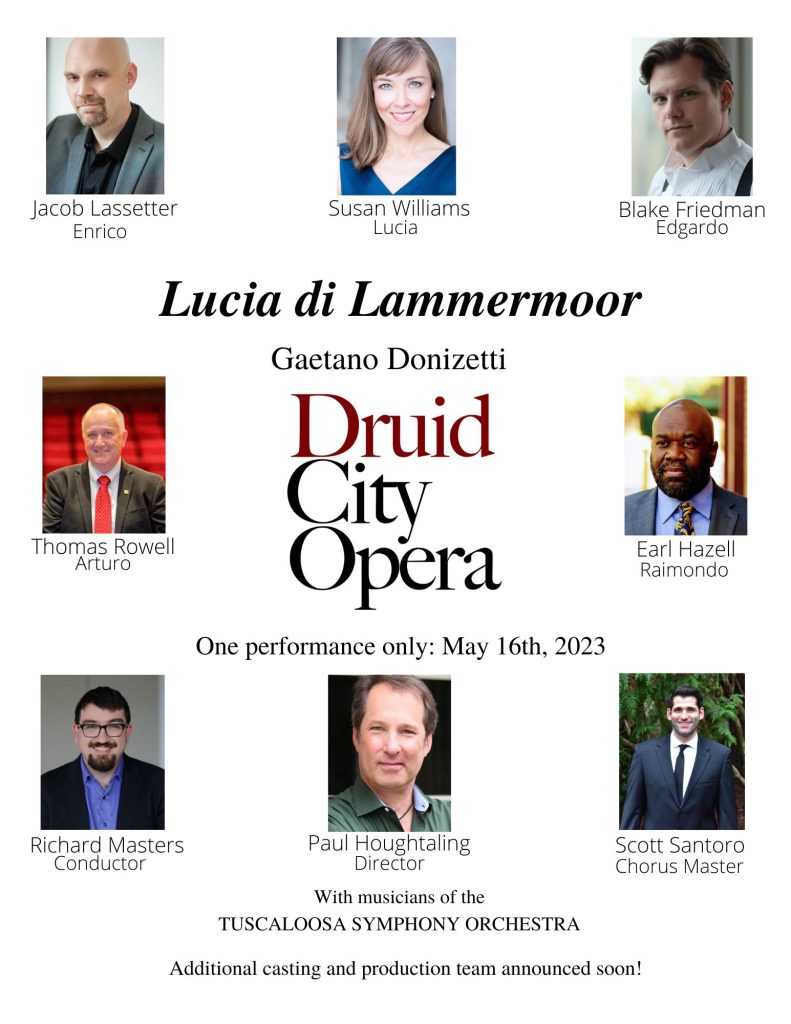 In partnership with the
Tuscaloosa Symphony Orchestra

PAID YOUNG ARTIST OPPORTUNITIES for roles not yet cast, covers, and other opportunities – Click HERE for the application on YAPTracker.

HISTORY OF DRUID CITY OPERA … After a highly successful 11 year run, it was time to take the next step with the Druid City Opera Workshop, a nationally-recognized opera training program founded in 2010 by Paul Houghtaling.  Druid City welcomed over 300 young artists into its program over the years and offered a unique array of experiences and opportunities designed to prepare young singers for the next steps in their careers.  The Druid City program also included professional internships for emerging stage directors and collaborative pianists, many of whom have gone on to impressive teaching, directing, and collaborating careers, or who worked with us in mid-career to polish and renew their skills (including Jen Stephenson, Baylor University; Charles Anthony Moore, University of Northern Colorad0; Joshua May, Columbus State University; Ariana Wyatt, Virginia Tech; Taylor Hutchinson, Truman State University; Lauren Carlton, University of Central Arkansas; Bonita Bunt, Ole Miss; Joey Garcia, freelance director; and many others.) We will forever be proud of what we accomplished with the Druid City Opera Workshop and we invite you to review its history through the links below (an archive of schedules and final programs will be posted soon). Long time, devoted Druid City faculty included Kevin Chance, Susan Fleming, Stacy Gulli, Amanda Johnston, Linda Lister, Richard Masters, Dawn Neely, Matthew Von Redlich, and David Ronis, and so many others, as well as UA voice faculty Alexis Davis-Hazell, David Tayloe, and Susan Williams.  Thank you all!

The Druid City Opera is a new professional company engaging exciting artists from around the U.S.  We look forward to offering compelling and powerful operas not heard in Tuscaloosa, if ever, or at least not in many generations, while still offering opportunities to young singers.  We believe we are the first professional opera company based here in Tuscaloosa, and we look forward to sharing our mission and our voices with opera lovers throughout the West Alabama region.

* – Both Dr. Withrow and Dr.Santoro are former young artists and interns with The Druid City Opera Workshop. We are proud of that!

SINGERS – Watch this space and our social media posts for announcements on repertoire and auditions for 2023.

About UA and Tuscaloosa

Nicknamed the Druid City, Tuscaloosa is home to The University of Alabama, a beautiful campus and surrounding community, located about an hour away from Birmingham. We are easily reached from the Birmingham airport, as well as Amtrak, and there is plenty to do if you would like to extend your stay after the opera, or arrive early — restaurants, museums, cultural events, theater and concerts.  Huntsville is only 90 minutes away; Montgomery is a two-hour drive; Atlanta is just three hours away; Memphis and Nashville are about three-and-a-half hours from us; and Mobile is about a four-hour drive.  We invite you to experience grand opera in Tuscaloosa and the West-Central Alabama region!